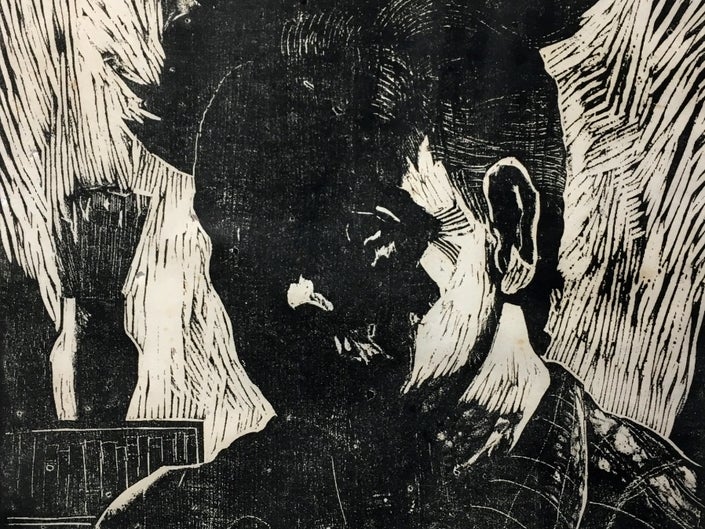 Brookdale Center for Visual Art’s newest exhibit, “Morris Blackburn and His Legacy: Painter, Printmaker, Writer and Teacher” opened Jan. 24 with a reception brought together three generations of artists and students, their relations branching and twisting together by means of who taught who and then went on to teach others. This tree of artists based out of South Jersey and Philadelphia has strong roots, and those are Morris Blackburn.

Blackburn’s working legacy is displayed on the walls of the CVA and summarized in the subtitle of the exhibit. Born in Philadelphia in 1902 Blackburn stayed there most of his life. As a young man he bounced around different schools and jobs in the city, first at the Philadelphia Trade School, then the Hog Island shipbuilding yard, then the Graphic Sketch Club, where he started his studies as an artist. He later went on to hold faculty positions at the Pennsylvania Academy of Fine Arts and the Pennsylvania Museum School of Industrial Art.

“‘All painting is abstract painting’ is what he always used to say,” said Professor Marie Naples, the exhibition curator. This is one of several Blackburnisms, Maber shares with students and others, as her memory of him as a teacher is a mosaic of idioms and quirks. “Dare to be lousy” is another one that resonates with Maber, who remembers him as “Blackie.”

As a teacher, Blackburn gained a reputation as a loud, open and loving man, Maber said. He was unafraid of allowing students’ creativities to roam wherever they pleased. This roaming was also important for his art career: Blackburn started to experiment with color, form and abstraction in the 40’s, early for any American, especially one studying in Philadelphia, a place known for its rigid art traditions, Maber said.

Maber said the project that this exhibition stems from nearly 40 years ago, when she was a student at Pennsylvania Academy of Art and enrolled in a class with Blackburn. As she became more familiar with him, she was invited to his house, where she remembers seeing some classmates Blackburn had hired to do some work around the house and being offered cheese and crackers and art supplies. She also met Betty, Blackburn’s wife, who she would become a lot closer with soon after those visits.

Blackburn died in 1979, two years after Maber took his class. After his death, Maber would visit Betty to help her preserve Blackie’s memory. This included cataloguing his large portfolio and reading through his many journals. During this process, Maber wrote about what she learned and imagined these writings becoming academic articles or a biography one day.

Fear she didn’t have the experience needed to publish and other aspects of her life prevented Maber from completing her work on Blackburn. It wasn’t until this past year that Maber was granted a sabbatical from Brookdale to continue this work. This exhibition is a product of her work through the years and during her sabbatical.

“Who else would do this for him?” is a question Maber asked herself in deciding to bring Blackburn’s work to Brookdale. “What I wanted to do was finish Betty’s work for her.”

“This is a very small percentage of what exists of his work,” said Ron Rumford, director of Dolan/Maxwell, the gallery where much of the Blackburn artwork in the exhibit came from. “That being said, this is his best.”

The exhibit contains 56 works, half by Blackburn and half by students of his. Like Blackburn and his students, the work is eclectic and dances through media, eras and styles. Some notable works are Pat Witt’s landscapes. Witt is a Jersey legend in her own right, and some of the works displayed were painted by Witt after she lost her eyesight in her late 80’s.

The exhibit is in the Center for Visual Arts Gallery on Brookdale’s campus and will be up until Feb. 21. Be on the lookout for Maber’s biographical works on Blackburn in the online archives of the Pennsylvania Academy of Arts. She plans on finishing and publishing soon, assuring Blackburn’s legacy is freely available for anyone interested.