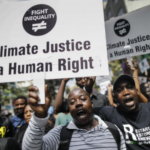 On Monday, Feb. 22 from 2 to 3 p.m., Brookdale history department chair Dr. David Bassano gave a Zoom lecture called “Climate Change and Human Rights,” an event sponsored by BCC’s Global Citizenship Project.
Anthropogenic climate change, which occurs due to human activities such as fossil fuel use, leads to increased global temperatures, increased ice melting, more severe weather and civil unrest, Bassano said.
Such changes infringe upon socioeconomic rights—the rights enshrined in the Universal Declaration of Human Rights adopted by the United Nations. These rights state that all people have the right to access their basic needs.
The disruption of infrastructure from natural disasters decreases agricultural yields and livestock, while also slowing food distribution and refrigeration. Droughts, vanishing glaciers, and contamination of freshwater aquifers obstruct access to clean, safe water, which is a human right because a person requires between 50 and 100 liters of water each day to live, Bassano said.
A lack of water leads to dehydration, health problems and death. Sea level rise decreases access to adequate housing, which is also a human right. About 40 percent of the world’s population lives within 100 kilometers off the coast. Sea level rise is projected to increase by 4.5 feet by 2100 and flood out 200 million people. Climate change leads to excessive heat and dehydration, respiratory and mental health issues, along with the increased spread of infectious diseases.
Bassano also discussed the economic effects of climate change and social security, which is the right to security when people experience unemployment, disability, illness, old age, or other financial hardships. Climate change leads to economic decline by increasing unemployment rates and illness incidence rates. This increases the demand for social security, but people may not be able to afford it with the loss of tax revenues, he explained.
Another problem with climate change is immigration. In 2017, 68.5 million people were forcibly displaced. By 2050, this will be 200 million people. Immigrants and migrants flee natural disasters and starvation. Although rich countries consume more fuel than poor countries, climate change disproportionately affects poor countries with fewer resources. Africa, the Middle East, and Southeast Asia suffer from severe climate change effects and poverty. Poverty makes countries more vulnerable to climate change because it decreases the ability to implement adaptation and mitigation. In wealthy countries, not all communities have the same amount of money, so poor states may struggle to adapt.
The devastating effects of climate change highlight the need for the government to develop a comprehensive response plan, Bassano said. The government has proven largely ineffective in combating climate change due to its political differences and its tendency to focus on national or regional problems instead of global ones.
The world is not equipped to face the threat of climate change to human rights. Political leaders and public health professionals must implement strategies to reduce the impact of climate change on vulnerable populations, especially low-income communities, and immigrants. This will adequately prepare the global economy and public health system to respond to climate change and protect human rights.
For more information about the Global Citizenship Project, click this link: https://www.brookdalecc.edu/international/spring-events-calendar/