‘Killing Is Easy’ Examines Life of Comedian Gone Too Soon 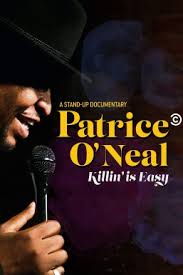 It’s been 10 years since the passing of stand-up comedian, Patrice O’Neal. Recently, Comedy Central released a documentary about his life and career titled “Killing is Easy.”
The title of the documentary stems from a comment that O’Neal once made to fellow comic, Denis Leary, one of the many comedians that contributed to the documentary. “Killing is easy, once you learn how to kill as a comedian, killing is easy. Everyone in the room is laughing, but that’s not what he wanted. He wanted the truth,” Leary said.
O’Neal passed away at age 41 from a stroke due to complications from Type 2 diabetes. At that point in his career, he had not been a mainstream comic, albeit being a seasoned one, and was very well known and respected in the comedy community.
Much of his material was controversial and would not fare particularly well in today’s social climate due to topics such as politics, race, misogyny, sex or just simply being politically correct at all. There was never any pulling punches or masking anything in his act. He said what was on his mind and did not fear the consequences — to the degree that he ended up losing high-level jobs for movies or TV shows because of refusing to alter his content or to be “safe.”
Early in the documentary, comedian Jim Norton, a close friend of O’Neal’s, jokingly states that “Patrice was a genius who constantly shot himself in the foot.” Other comics, such as Bill Burr, Colin Quinn and Dane Cook would go on to praise O’Neal for his talent and brutal honesty on stage.
While O’Neal’s commentary on racism during his comedy act over the years is extremely blunt, much of that was birthed through his time as a young Black man growing up in a predominantly white Boston area.
O’Neal was born in New York City and raised by his mother in Roxbury, Massachusetts, a neighborhood within Boston. At one point during the documentary, a clip is played of O’Neal on a radio show talking about how he was at summer camp when he was younger and another white camper called him the n-word, but the boy ran away after doing so. O’Neal goes on to explain how he chased the boy and grabbed him, but was thrown out of camp for doing so, which is when, in his own words, he said “I learned a lesson — you have the skin color of the enemy.”
The documentary is a very in-depth, entertaining and revealing look into the comedian’s life. Even though O’Neal is known for being a comedian, his words went much deeper than that — much like that of George Carlin, Bill Hicks or even Richard Pryor.
Often, comedy comes from places of darkness, or struggle and pain — Patrice O’Neal tapped into that, but sadly did not live long enough to have his full potential noticed on as big of a stage as the legends that came before him. While not given mainstream recognition for his talent at the time, it’s refreshing to see this documentary out there and to see O’Neal recognized for his brilliance as a comedian — whether you agree with him or not.
“Killing is Easy” is currently available on the Comedy Central app, or on the website at www.cc.com