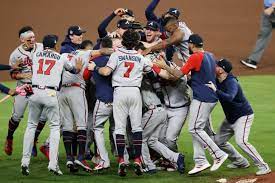 On the morning of July 11, Braves coaches, players, and fans were starting to question what was thought to be one of the top teams in the league during the preseason. Their young star was injured for what would be the rest of the year, and the team had fallen to 44 wins and 44 losses.
The National League Eastern division seemed to be the weakest in all of Major League Baseball and was led by the Mets, who at the time had 48 wins and 40 losses. Most baseball fans thought the Mets would win the division as they held the first-place lead for three months.
Many people thought it was time for the Braves to make some deals and trade away some of their current stars for what they would hope to be future stars. The Braves had other plans.
On July 15, the Braves made their first big trade of the season by acquiring Joc Pederson, who had just won a World Series with the Dodgers in 2020. Pederson was not acquired as a replacement for the injured Ronald Acuña Jr; instead, it was in hopes he could temporarily help the team produce and win some games. The Braves knew it wasn’t going to be enough.
For a couple of weeks, Atlanta stayed quiet and did not make a noteworthy transaction. Then on July 30, the MLB trade deadline, Atlanta came out firing. First the Braves traded for someone who is considered by many to be a very underrated ballplayer, Eddie Rosario. Just a few minutes after making headlines with this trade, Atlanta acquired the high-slugging outfielder, Adam Duvall. Everyone thought the Braves did what they needed to at the deadline, but Atlanta’s front office did not agree. They made one more big trade at the deadline by acquiring yet another outfielder, Jorge Soler.
On Aug. 15, the Braves saw themself in first place in the NL East division for the first time all season. Fans who had been skeptical of Atlanta’s trade began to learn that the team knew what it was doing.
The Braves had a narrow lead in the division as the Mets started losing more games, while the Phillies started winning more games. Atlanta and Philadelphia were so tightly contested until the middle of September when the Braves started to expand their lead. On Sept. 30, the Braves officially won the NL East with a 5-3 victory over the Phillies.
When the playoffs started, many considered the Braves to be a team that would be eliminated in the first round. The Braves once again proved all of their doubters wrong by defeating the Milwaukee Brewers in the National League Division Series three games to one. A lot of fans were not surprised by the Braves being successful in the first round of the playoffs as the Braves were red hot toward the end of the season while the Brewers were ice cold.
The National League Championship Series was going to be tougher for the Braves as they would have to take on last year’s World Series winner, the Los Angeles Dodgers. This time it seemed like not a single person predicted a Braves win. The Braves once again managed to prove all doubters wrong by being the unlikely winners.
Now it really came down to the toughest challenge yet. The Atlanta Braves had to take on the Houston Astros in the World Series. It seemed as though all of America, except for Astros fans, were rooting for the Braves following the Astros 2017 cheating scandal. Most baseball fans did not want to see the Astros win the World Series after that controversy, which meant more fans rooting for the Braves. This may have made things even more difficult for Atlanta, knowing they had this extra pressure on them when they had already spent a season battling as the underdog.
The first two games of the series were in Houston, with the Braves winning in Game 1 and the Astros winning in Game 2. Even though the series was tied, the Braves had some extra confidence as the series was now heading into Atlanta. The reason Atlanta was so confident is because they had won all five home games they played in the postseason, and they were now taking that momentum back home.
Atlanta won the first two of the three home games, which meant they were one win away from winning it all. In Game 5 of the series, the last one in Atlanta, the Braves jumped out to an early 5-0 lead. Fans were very confident in this being the moment where Atlanta won it all, but very quickly Houston managed to tie, and take the lead. The Braves wanted to be the first team since the 2013 Boston Red Sox to win the World Series in front of a home crowd, but the Astros managed to hold on to win game five and go back to Houston for game six, and if needed, game seven.
A lot of people thought this may be the turning point in the series, and that Houston may come back to win it. At the start of the game Atlanta came out swinging and managed to put up an early 5-0 lead, just as they did two days prior. This time, the Astros did not manage to catch up, and they barely managed to produce any offense at all as they lost with a final score of 7-0.
With that big win on Nov. 2, the Atlanta Braves get to call themselves World Series champions for the first time in 26 years. Most fans were satisfied with the outcome, and for now the Braves coaches, front office, players and fans get to celebrate–especially the World Series MVP, Jorge Soler.