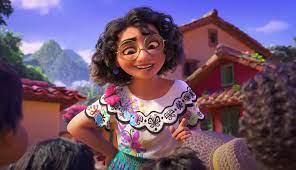 Magic is in the air this holiday season, which is perfect since the new magical Disney movie “Encanto” is now in theaters.

“Encanto” follows Mirabel and her family, The Madrigals, who all live within the magical house hidden in the mountains of Colombia in a special place called Encanto.

The magic within “Encanto” has blessed each member of the Madrigal family with a special and magical ability unique to their person. Everyone, except Mirabel that is.

Mirabel is the single person within her family that did not receive a magical ability, and no one is quite sure why. However, as the story progresses, audiences learn that Mirabel is her family’s last hope as the magic starts to crack and break within their household, and the family members are slowly losing their unique magical abilities.

We follow Mirabel on her quest to learn the truth about the magic and how to help keep her family together. Along the way, Mirabel starts to learn the magical “gifts” blessed upon her family are not all it’s cracked up to be, as her sisters begin to open up to her and express their sorrows due to their fear of letting others down and not living up to their family’s expectations.

Mirabel’s older sister, who was given the gift of superstrength, begins to feel the pressure of always having to be strong and feels as though her world might collapse if she does not hold it all together, while Mirabel’s other sister, Isabela, always feels the need to be perfect and can’t show any kind of imperfection or again, she will let her family down.

As the story of “Encanto” continues, The Madrigal family understands they are not defined by their gifts, and instead are able to be who they truly are. The overall story of this Disney film gives audiences a clear understanding of accepting who you are and caring for loved ones based on who they are instead of what we expect them to be.

As with many Disney movies, this film gives a heart-warming life lesson that applies to everyone no matter what age. This movie is a unique take on the magical world of Disney.

As per usual, we have the typical heroine fighting to save her family, which in itself is incredible as Disney has begun having female empowered characters for young girls to look up to and aspire to idolize.

Even more inspiring is the use of Colombian culture within this movie. This beautiful culture is represented in an accurate way and allows people, no matter their age or gender, to see someone of their heritage represented on the big screen in an inspirational manner.

The main character, Maribel, is also not the stereotypical looking princess. For example, she is not a stick-thin woman with long, luscious hair. She is of average build and is a “normal” looking female who embraces her glasses and natural short, wavy hair.

Personally, it is incredible to see more realistic characters being portrayed in animated films, and I have to praise Disney for embracing the natural beauty of individuals.

As expected, Miranda did help create the soundtrack to this movie, but he also helped develop the screenplay. The soundtrack features multiple foot-stomping beats followed by incredible lyrics that help tell the story of this movie, while also highlighting the emotions featured within the characters.

One song in particular, “Surface Pressure,” is sung by Mirabel’s older sister, Luisa. This song goes into detail about how Luisa feels the pressure of having to always be the strong one within her family–physically, mentally, and emotionally. There are times where Luisa feels she may fall apart and need a break. However, due to the gift blessed upon her, she can never show weakness. This song is just one example of many songs that leave an impact on audiences. It is undeniable that Miranda is an outstanding lyricist as well as storyteller, and his work on “Encanto” just validates his creativeness and talent.

Disney has gone above and beyond, as usual, with their technique in animation for this new film, which is highly recommended for people of all ages who enjoy love and laughter. This film will leave you with lasting magical memories. Be sure to check out “Encanto” now in theaters everywhere and soon to be available via Disney+ beginning Dec. 24.